“It’s Still Not Business as Usual” Theme for 2019 Event 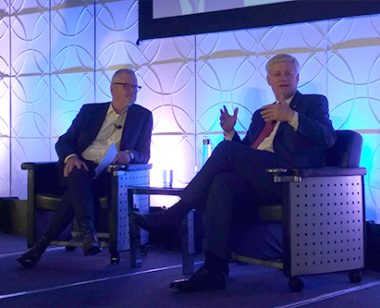 Former Prime Minster Stephen Harper in conversation with FCPC President Michael Graydon where he took questions from the audience and discussed a variety of issues including Brexit. On this topic, Harper disagreed with the comments of former Prime Minister Brian Mulroney expressed last year at the same conference that “some day in the future the British people will burn in effigy Nigel Farage and others” for the pain that Brexit will have inflicted on Britain and the British economy. Two former Conservative Prime Ministers – with two VERY different views!

As a collaborative industry association with FCPC (Food & Consumer Products of Canada), CA was invited to participate in this annual event which included speakers on a range of topics that highlighted the fast pace of change facing industry leaders. From international trade and the global economic cycle, to the growing power of social media and creativity in marketing, participants were treated to a variety of entertaining and enlightening experts.
A highlight of the event was a presentation and Q & A with former Prime Minister Stephen Harper who talked about his new book and its attempt at understanding the political forces that led to both Donald Trump’s election in the U.S. and the Brexit vote in the U.K. Some interesting insight included Mr. Harper’s observation that Donald Trump is the first U.S. President since likely the 19th century “to view Canada as a foreign country”. The implications of this reality have been, and will continue to be for the remainder of his Presidency, significant in the relationship between our two countries. Understanding and managing this reality will be important for government as well as industry.
CA works closely with FCPC on issues and strategies of common concern with CA President Darren Praznik sitting on the FCPC Consumer Products Committee and CA becoming an active partner in FCPC’s Smart Label initiative.